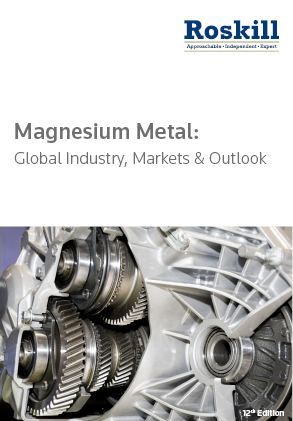 Global growth in the magnesium market is expected to average 3.4% per year reaching almost 1.2 million tpy by 2020, according to a new report — Magnesium Metal: Global Industry, Markets & Outlook, 12th Edition — from Roskill that forecasts the industry out to 2020. Globally aluminum alloys and die casting are predicted to be the fastest growing markets at about 4% per year each. The main factor affecting magnesium demand will probably be its use in automobiles, both because of greater unit consumption and increased vehicle production.

The development of dense uniform dispersion of silicon carbide nanoparticles (14% by volume) in magnesium through nanoparticle self-stabilization in molten metal could have a significant long term impact on the demand for magnesium alloys. The material is said to provide an enhancement of strength, stiffness, plasticity, and high-temperature stability, which delivers a higher specific yield strength and specific modulus than nearly all structural metals.

Magnesium-ion rechargeable batteries, which have twice the capacity and energy density of lithium ion batteries, could also be a potentially significant use of the material. Toyota Research Institute of North America (TRINA) recently developed a new breakthrough involving magnesium batteries, which could provide a much safer and more energy-dense alternative to current lithium battery technology.

There are more than 50 magnesium smelting operations in China, most of them in the provinces of Shaanxi and Shanxi, which accounted for 61% and 28% of production respectively in 2015. On a company basis, the largest productive capacity is held by Shanxi Yinguang Huasheng with 80,000 tpy, which is followed by Ningxia Hui-Ye Magnesium with 60,000 tpy.

There are four new projects aiming to start production before 2020:

Aluminum alloys containing on average about 0.8% of magnesium are used in a wide range of industries, but packaging (35% of magnesium use in aluminum alloys), transport (25%), and construction (21%) are the three most important. About 350,000 tons of magnesium were used for alloying in 2015.

Magnesium castings are used chiefly by the automobile industry, but also in aerospace components, defense applications, and consumer goods (laptop, tablet, and mobile phone cases in particular). The most widely used magnesium castings contain more than 90% Mg, alloyed most commonly with aluminum. Some castings are alloyed with rare earth elements to give creep and corrosion resistance. Globally about 315,000 tons of magnesium were used for castings in 2015.

The fourth major use of magnesium is in desulphurisation of steel; about 95,000 tons were used in 2015. Sulphur causes brittleness in steel and low sulphur facilitates modern production processes. Other significant uses of magnesium are as a nodulariser in cast iron and in cathodic protection of metal structures.

More information on the Magnesium Metal: Global Industry, Markets & Outlook report and downloadable sample pages of the report are available for download online.