Editor’s Note: Much has changed in the automotive world since the last time that Light Metal Age spotlighted patents focused on the role of aluminum in electric vehicles (EVs). More and more automakers and suppliers are devoting their intellectual and financial resources toward EV production. As a result, automakers are displacing or at least minimizing the use of internal combustion engines (ICEs), especially diesel, to power their vehicles, opting instead for electric battery powered vehicles that include various hybrid or full-electric designs. This strategy has sparked a revolution in research and development devoted toward more efficient batteries and methods of charging, in order to effectively raise the mileage of hybrid and full-electric vehicles. This has resulted in a wave of intellectual property progress, which is the focus of this patent calendar review.

Aluminum’s place in this revolution is secured primarily due to its lightweight advantage over steel. However, aluminum is not necessarily able to boast a lighter weight than carbon fiber composites, which cost more and are not easily recycled. As automakers switch from a traditional ICE design to EV technology, the amount of aluminum castings used in ICE powertrains will naturally be reduced in favor of wrought aluminum components implemented in EVs. Many of the recent patents here are assigned to various international companies and deal with battery installations designed to form the base of EV floor structures that carry and box the batteries. These lightweight structures must be not only rigid, but also have impact resistance in case of a vehicle crash. As is seen in this patent selection, multiport extrusions serve this function well. Various methods of cooling the batteries are incorporated into the battery packs and even provide seasonal air conditioning and heating of the EV interior.  Altogether, whether used in battery boxes, body structures, motor and manifold housings, or interiors, these recent patents demonstrate that EV manufacturers and suppliers depend on the lightweight advantage that aluminum provides in achieving system performance. 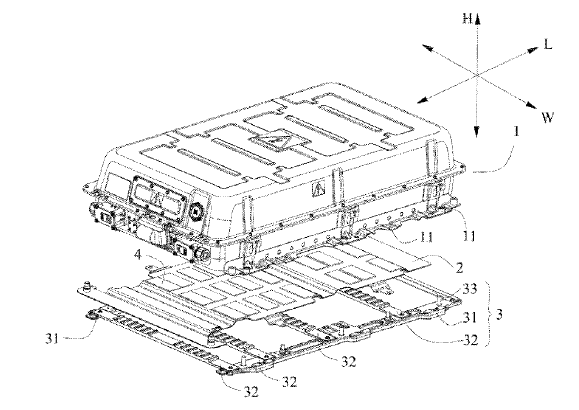 US10978763 — BATTERY PACK COVER FOR AN ELECTRIFIED VEHICLE — Ford Global Technologies, LLC (USA) — An exemplary battery pack cover includes a polymer layer and a metallic layer comprising aluminum grounded to a chassis of an electric vehicle. An exemplary method includes shielding battery cells of a battery pack against electromagnetic interference and thermal energy using a multilayer cover that is grounded to a chassis of an electrified vehicle.

US10940891 — ELECTRIC VEHICLE — Volvo Car Corporation (Sweden) — An electric vehicle, including, a user compartment and a front section including a portion of a vehicle chassis, a crash absorbing member located in the front section and connected to the portion of the vehicle chassis, the crash absorbing member including a first extruded profile, preferably an aluminum profile, having a main extension direction in a transverse direction (y) of the vehicle, whereby the extrusion direction of the first extruded profile extends substantially in the transverse direction (y) of the vehicle, and wherein further the first extruded profile includes at least two cells (C1, C2) being defined by outer walls and at least one intermediate wall separating the at least two cells (C1, C2), wherein the at least one intermediate wall has a main extension direction in the transverse direction (y) and a second extension direction which extends substantially in a vertical direction (z). 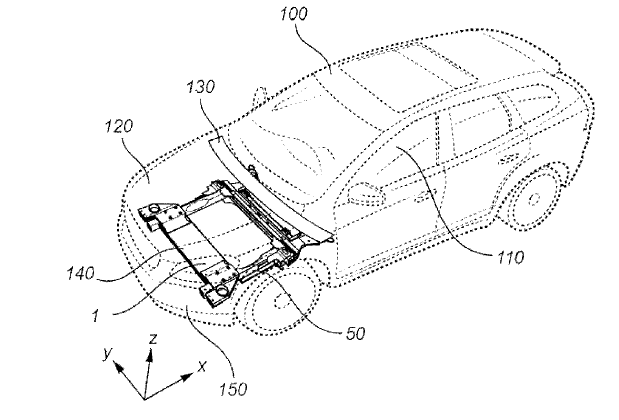 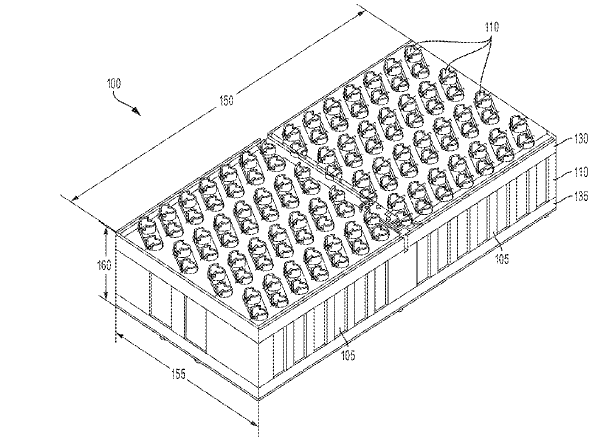 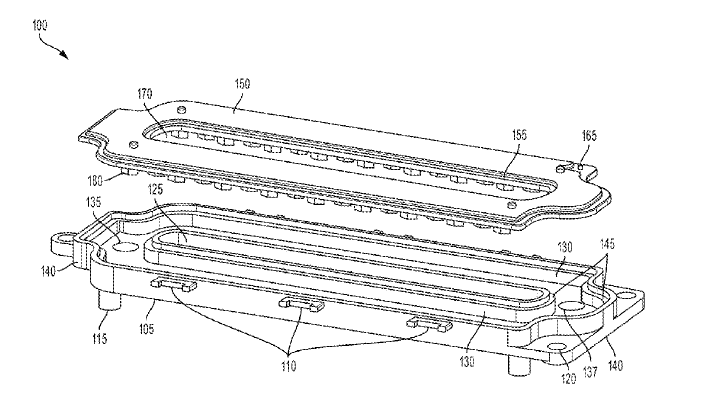 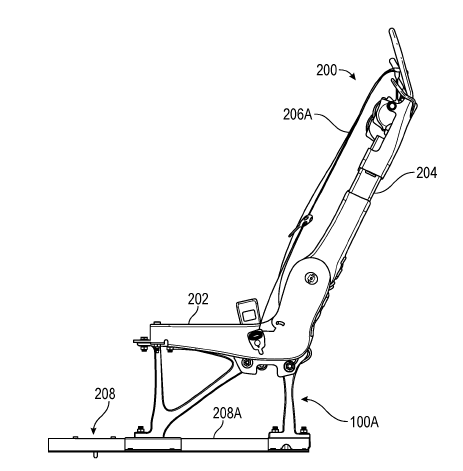 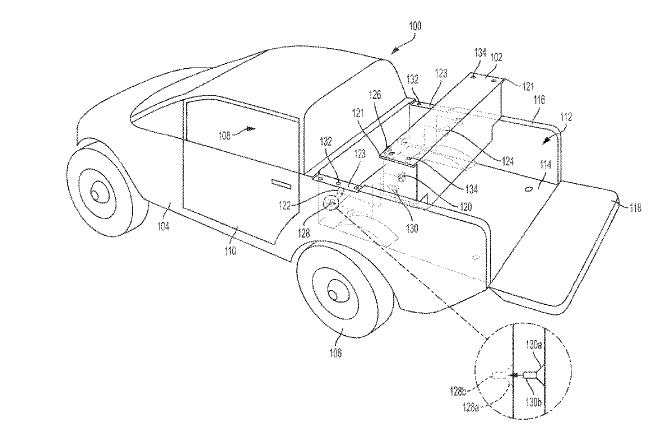 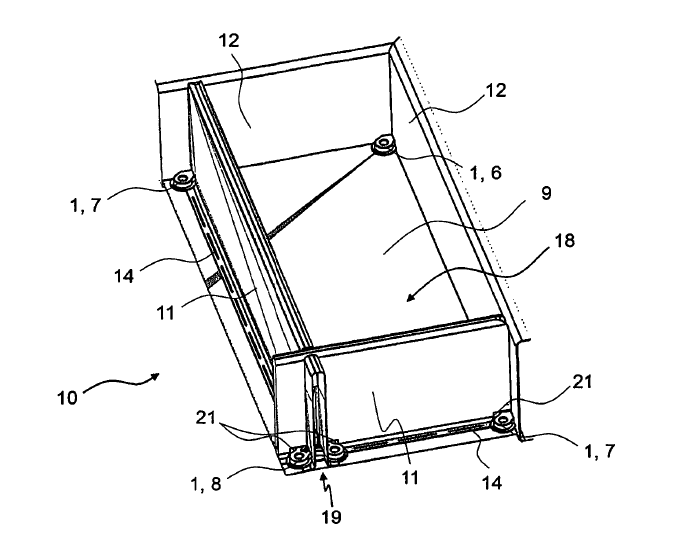 US10780767 — SYSTEM FOR ABSORBING AND DISTRIBUTING SIDE IMPACT ENERGY UTILIZING AN INTEGRATED BATTERY PACK — Tesla, Inc. (USA) — An energy absorbing and distributing side impact system for a vehicle includes first and second side sills, each of the first and second sills comprising multiple longitudinal channels, at least an upper longitudinal channel positioned above a vehicle floor panel and at least a lower longitudinal channel positioned below the vehicle floor panel, a battery enclosure mounted between front and rear suspensions of the vehicle, the battery enclosure having a first side member attached to the first side sill, and a second side member attached to the second side sill; cross-members integrated into the battery enclosure; and at least one mechanical connection securing the cross-members to the vehicle floor panel. Preferably battery pack side members 403, including extended region 405, battery pack top panel 401 and battery pack bottom panel 505 are each fabricated from a light weight metal, such as aluminum or an aluminum alloy.

US10703186 — BATTERY CARRIER FRAME AND METHOD FOR THE PRODUCTION THEREOF — Dura Operating, LLC (USA) — In the case of a battery support frame for an electric vehicle battery, said support frame being optimized in terms of tightness, compensation of component tolerances and load absorption in particular in the event of a crash, provision is made for a corner element to be arranged as tolerance compensation between a longitudinal profile and a transverse profile, the longitudinal profile and transverse profile, both hollow –chamber profiles, being connected together via said corner element. 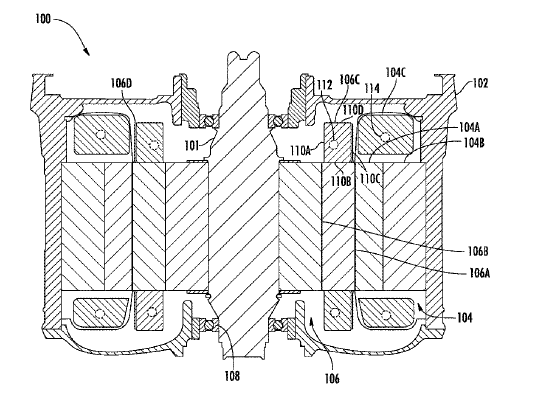 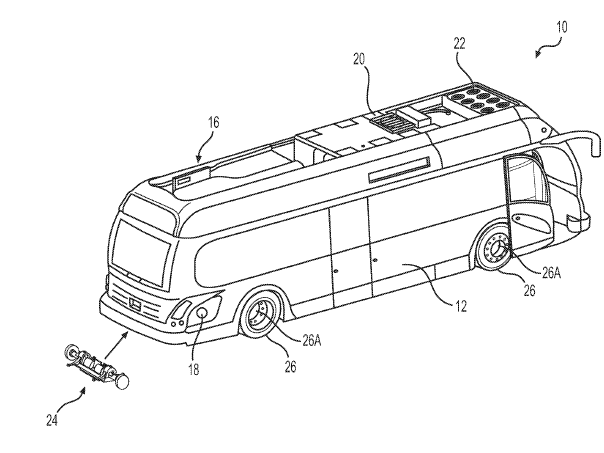 US10673093 — ELECTRIC VEHICLE LITHIUM BATTERIES HAVING NON-UNIFORM ANODE LAYER — Chongqing Jinkang Energy Vehicle Co., Ltd. (China) and SF Motors, Inc. (USA) — Apparatuses, systems, and methods of storing electrical energy for electric vehicles are provided. A battery pack can be disposed in an electric vehicle to power the electric vehicle. A battery cell can be arranged in the battery pack. The battery cell can include a housing. The housing can define a cavity within the housing. The cavity of the battery cell can include a separator having a first side and a second side, a cathode disposed along the first side of the separator, and an anode disposed along the second side of the separator. The anode can include a first portion adjacent to the second side of the separator, and a second portion adjacent to the first portion and separated from the separator by the first portion. A porosity of the first portion of the anode can be greater than a porosity of the second portion of the anode. The electrically conductive and thermally conductive material for the housing 110 of the battery cell 105 can include a metallic material, such as an aluminum alloy. 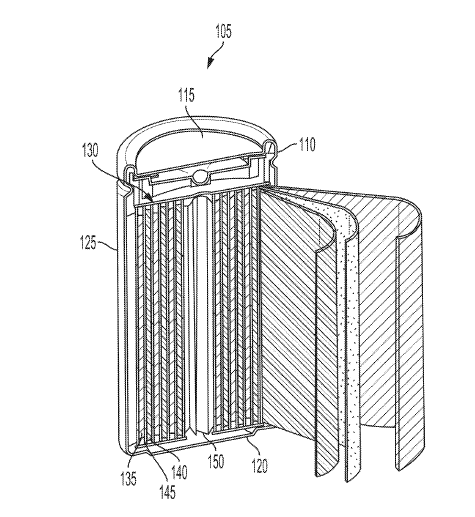 US10632858 — BATTERY ENCLOSURE SURROUNDED BY INTERNALLY REINFORCED CYLINDRICAL IMPACT ABSORBING ELEMENTS — Ford Global Technologies, LLC (USA) — A battery enclosure for the battery of an electric vehicle is disclosed that is provided with extruded cylindrical impact absorbing tubular members. The tubular members are arrayed about the battery enclosure between an inner wall and an outer wall in a spaced relationship. The tubular members are spaced from each other and include internal reinforcing walls that stiffen the battery enclosure and absorb impact loads. The reinforcing walls may be in an X-shaped, Y-shaped or parallel and may be oriented to absorb impact loads to a greater or lesser extent for an aluminum battery case made of an aluminum alloy AL6061-T6. 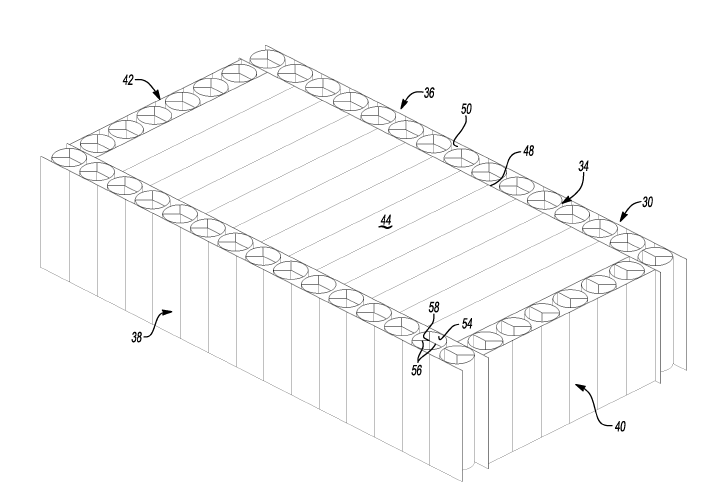 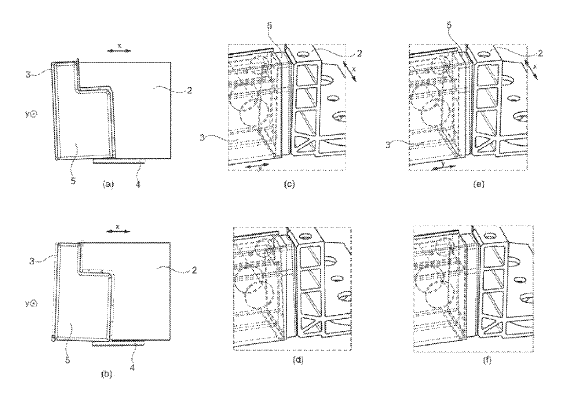 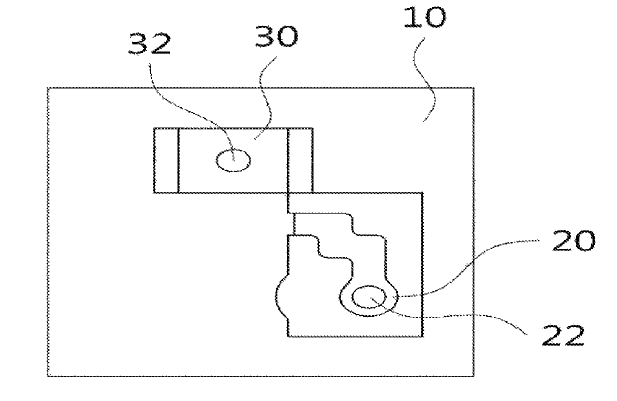 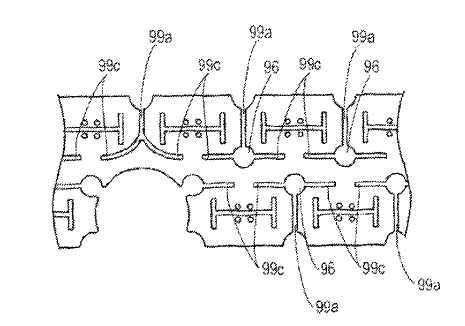 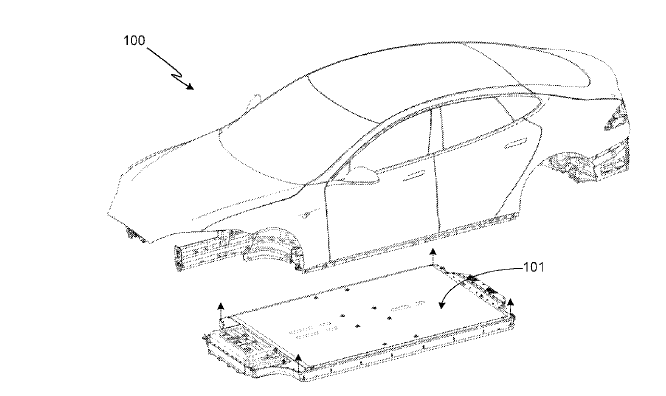 US10374270 — BATTERY HOLDER WITH COOLING SYSTEM — Benteler Automobiltechnik GmbH (Germany) — A battery holder for an electric vehicle is disclosed. The battery holder is mounted in a subfloor region of the electric vehicle and includes a pan and a cover. The pan is formed by an outer encircling frame and a bottom. The outer encircling frame is formed from multi-chamber aluminum alloy extrusions and the cooling system is integrated in the bottom of the pan. 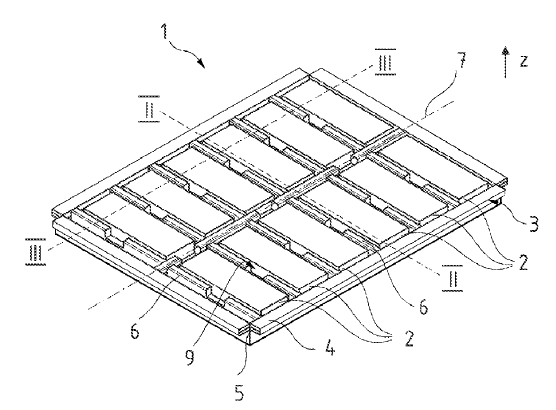 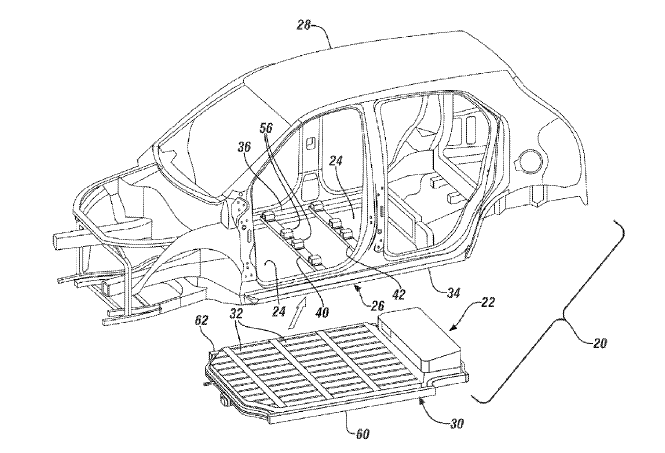 US10266199 — ELECTRIC VEHICLE — Guangdong Hua’chan Research Institute Of Intelligent Transportation System Co., Ltd. (China) — Disclosed is an electric vehicle, comprising a chassis (1), a vehicle body and a power battery (71), wherein the chassis (1) comprises a frame system (2) comprised of two multi-cavity aluminum box stringers and an aluminum multi-cavity beam assembly and connected between the two multi-cavity box stringers 21., a steering motor damping system (13) mounted on the frame system (2), a wheel system (12) connected to the steering motor damping system (13), a steering system (3) mounted on the frame system (2), and a braking system (4) mounted on the frame system (2); and the wheel system (12) comprises a left front wheel (121) using a hub motor, a left rear wheel (123) using a hub motor, a right front wheel (122) using a hub motor, and a right rear wheel (124) using a hub motor. Driving the wheels (121, 122, 123, 124) with the hub motors can omit a traditional mechanical transmission system, to simplify the structure of the chassis (1) and reduce the weight of the chassis (1). Compared with a traditional electric vehicle, the electrical vehicle has a lighter weight, smaller volume, reduced mechanical transmission loss, and improved electrical energy utilization rate. 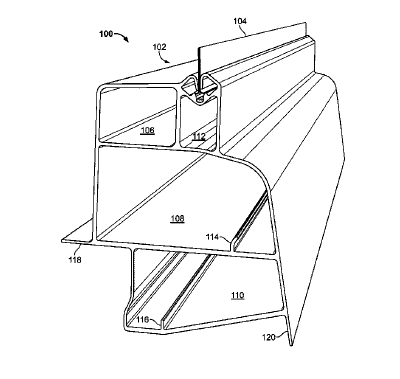 US10023038 — SYSTEM FOR ABSORBING AND DISTRIBUTING SIDE IMPACT ENERGY UTILIZING AN INTEGRATED BATTERY PACK — Tesla (USA) — An energy absorbing and distributing side impact system for a vehicle includes: first and second side sills, each of the first and second sills comprising multiple longitudinal channels, at least an upper longitudinal channel positioned above a vehicle floor panel and at least a lower longitudinal channel positioned below the vehicle floor panel; a battery enclosure mounted between front and rear suspensions of the vehicle, the battery enclosure having a first side member attached to the first side sill, and a second side member attached to the second side sill; cross-members integrated into the battery enclosure; and one or more bolts each extending though a respective opening in one of the cross-members and extending to an opposite side of the vehicle floor panel from the cross-member.