The International Aluminium Institute (IAI) has released its annual global statistics for both primary aluminum and alumina production, covering the year 2020.

The latest dataset is available on the IAI website.

The IAI data shows that Covid-19 did not lead to a reduction in global aluminum production in 2020. Production in China and North America increased by over 4% compared to the previous year (2019), while that of South America and Other Asia dropped by 6%. Other regions remained stable throughout 2020. 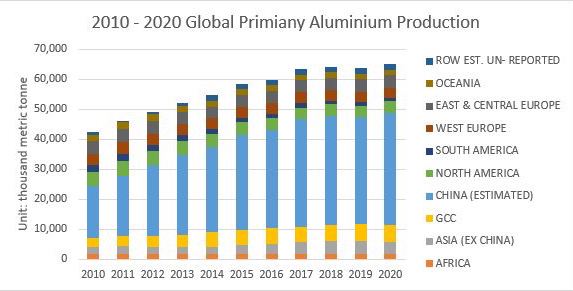 The data per region is as follows:

Over the last decade, global primary aluminum production has increased by over 50% in total, driven mainly by China and the Gulf.

The IAI noted that over the coming decades, global demand for primary aluminum will increase by over 40% through to 2050 as economies grow, urbanize, consume more goods, and build up their infrastructure.

According to the IAI, the continued increase in aluminum demand is a reflection of a growing appetite for environmentally friendly solutions in transport, building, infrastructure, energy and food security. It is also a testament to the relevance of aluminum in new applications such as medical devices and the digital technologies on which we increasingly rely.

Global alumina production was estimated to be 134,432 kt at a daily rate of 367.3 kt, representing an overall increased by 2% year-on-year in 2020. Alumina production in Africa & Asia (ex China) and South America increased by 20% and 10% respectively. North America appeared to be the only region that saw a significant reduction during the pandemic — a drop of 9%.

Similar to primary aluminum, in the last 10 years global alumina production has seen a total increase of close to 50%.