The International Aluminium Institute (IAI) has modeled a 1.5 Degree Scenario to guide the aluminum industry’s efforts to meet global climate goals. The modeling is based on International Energy Agency’s (IEA) Net-Zero by 2050 scenario, combined with the IAI’s material flow analysis and future demand scenarios.

According to the IAI, this scenario is the most ambitious decarbonization approach thus far and complements existing work, which includes: detailed historical emissions, business as usual scenario (BAU) to 2050 and a Beyond 2 Degrees Scenario (B2DS). Both the 1.5 Degree Scenario and B2DS are consistent with the Paris agreement.

The data shows a 1.5-degree scenario approach could result in a total sector greenhouse gas emissions reduction of 95% between 2018 and 2050. It will also require significant reductions in the carbon intensity of primary metal from 16.1 tonnes CO2e per tonne today to below 1 tonne in 2050.

“The 1.5 Degree Scenario would require significant reductions in overall emissions and emissions intensity in all major areas — including electricity, process emissions, thermal energy, and recycling,” said Marlen Bertram, IAI’s director, Scenarios & Forecasts. “These reductions would need to be achieved at the same time as aluminum demand increases — as it is used to reduce emissions elsewhere such as in electric vehicles, electrical cabling, and renewable energy generation.”

Both scenarios are based on decades of comprehensive data and analysis of future demand and already guide the many investments occurring in the industry’s quest to reduce emissions.

“The 1.5 dataset is not a replacement of the B2DS; rather, it is a different option for organizations to consider in the drive to make the change needed to reduce emissions,” said Bertram. 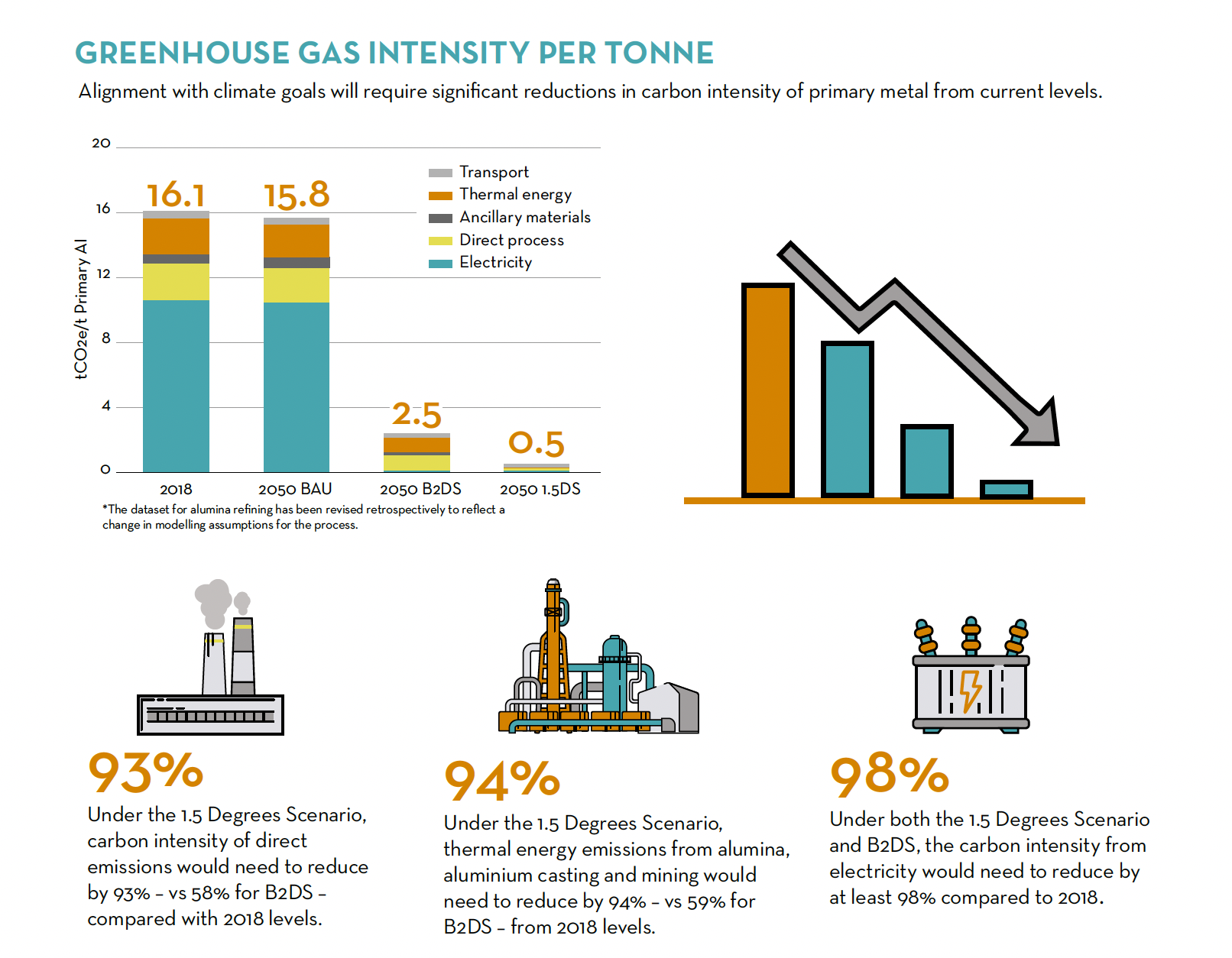 Primary aluminum production has increased consistently to meet growing demand over the past two decades. The emissions intensity of primary aluminum production significantly influences the overall emissions intensity for the aluminum sector. Bertram explained, “It is clear from our analysis that emissions reduction trajectories for individual companies will depend on location, available options and position in the value chain. While the outlook is promising, further technology development and investment is needed if a 1.5 Degree limit will be met.”

This scenario will guide and inform how the aluminum industry will progress in lowering their emissions. Investment in new technology is a major step in tackling climate change. For instance, the IAI has noted that they see new technologies being used in trials of zero-emission thermal energy, inert anode research and development, increased use of renewable electricity, and increasingly efficient recycling.

Around the world, the industry is investing in projects and new technologies and building critical partnerships that are playing a key role in meeting environmental targets for 2050. These include contracts for renewable energy, particularly wind, solar, and hydropower; the creation of virtual batteries within smelters; the smart use of fuel sources, such as hydrogen and recycled steam; the use of lighter vehicles for transporting goods; and ideas for taking the recycling agenda further.

These novel solutions support the IAI’s three pathways to emissions reduction for the aluminum industry:

“There is no single solution and it is reassuring to see that technology is advancing across the three pathways, and that governments, aluminum producers and the wider industry are forging powerful relationships that will truly make a difference,” said Pernelle Nunez, IAI’s director of Sustainability and Deputy Secretary General. “I’m confident that the fantastic work already under way will inspire our industry to think about actions they can take now and in the future to combat climate change.”