Alupro (the Aluminum Packaging Recycling Organisation), based in the U.K., reported a record year for aluminum recycling. According to annual data published by the National Packaging Waste Database (NPWD), the U.K.’s aluminum packaging recycling rate was a record 68% in 2021, with more than 156,000 tonnes collected for recycling (a 3% year over year). This means that more than four in five (or 82%) beverage cans were recycled last year in the country — matching the previous record set in 2020.

Despite a growing domestic market, aluminum packaging collected curbside and through bring and on-the-go systems increased by 5% (112,210 tonnes), while tonnage recovered from incinerator bottom ash grew by 2% (41,941 tonnes). More than 88% of this total volume was recycled within the U.K. and EU, with just 12% exported for reprocessing. 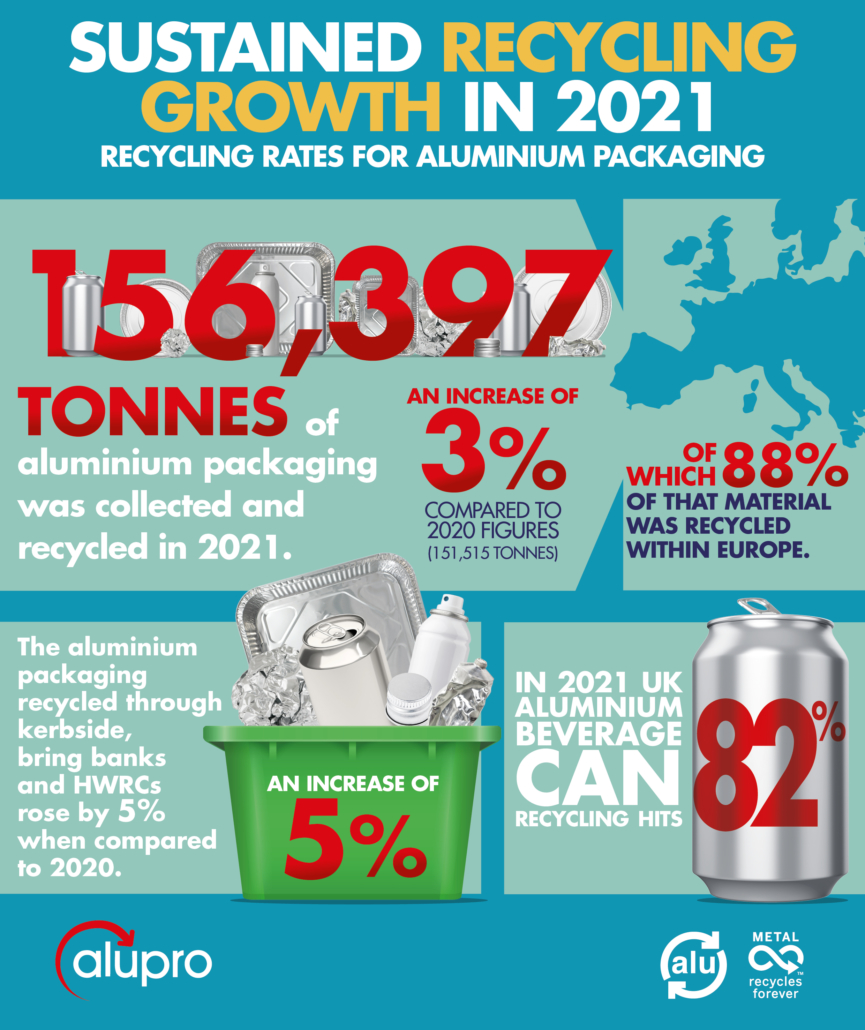 In 2020, recycling rates shot up across the board, mainly driven by the impact of the COVID-19 pandemic, resulting national lockdowns and mandatory working from home guidance. This could be due to the fact that more people were buying their own food from grocery stores, rather than indulging in take-out, which is more likely to be doled out in non-recyclable containers and thrown in the trash.

Despite the recycling upswing seen during the pandemic, many suggested that 2021 would see a natural drop in rates, due to gradually easing restrictions. Instead, consumers continued to recycle their aluminum packaging in 2021 and maintained their good habits.

“Looking forward to the first quarter of 2022, we hope to see record rates continuing, reflecting the positive trends of 2021,” said Giddings. “With higher, more ambitious national targets, we’re pleased to be moving ever-closer towards a 100% recycling rate for aluminum packaging.”

Alupro believes that communication will prove ever-more pivotal in maintaining consumer engagement and maximizing positive recycling behaviors. This exemplifies a key point included in the organization’s Aluminium Manifesto, which was released in March and calls for fundamental change in the U.K.’s approach to packaging and waste management.

“A record-breaking recycling rate reflects ever-increasing public awareness about environmental issues and the widespread benefits of recycling,” said Chris Latham-Warde of Every Can Counts, Alupro’s communications program aimed at driving beverage can recycling. “Over the past 12 months, Every Can Counts and also MetalMatters have continued to engage consumers throughout the U.K. and Ireland to make real inroads towards improving recycling rates at home and when on the go.”