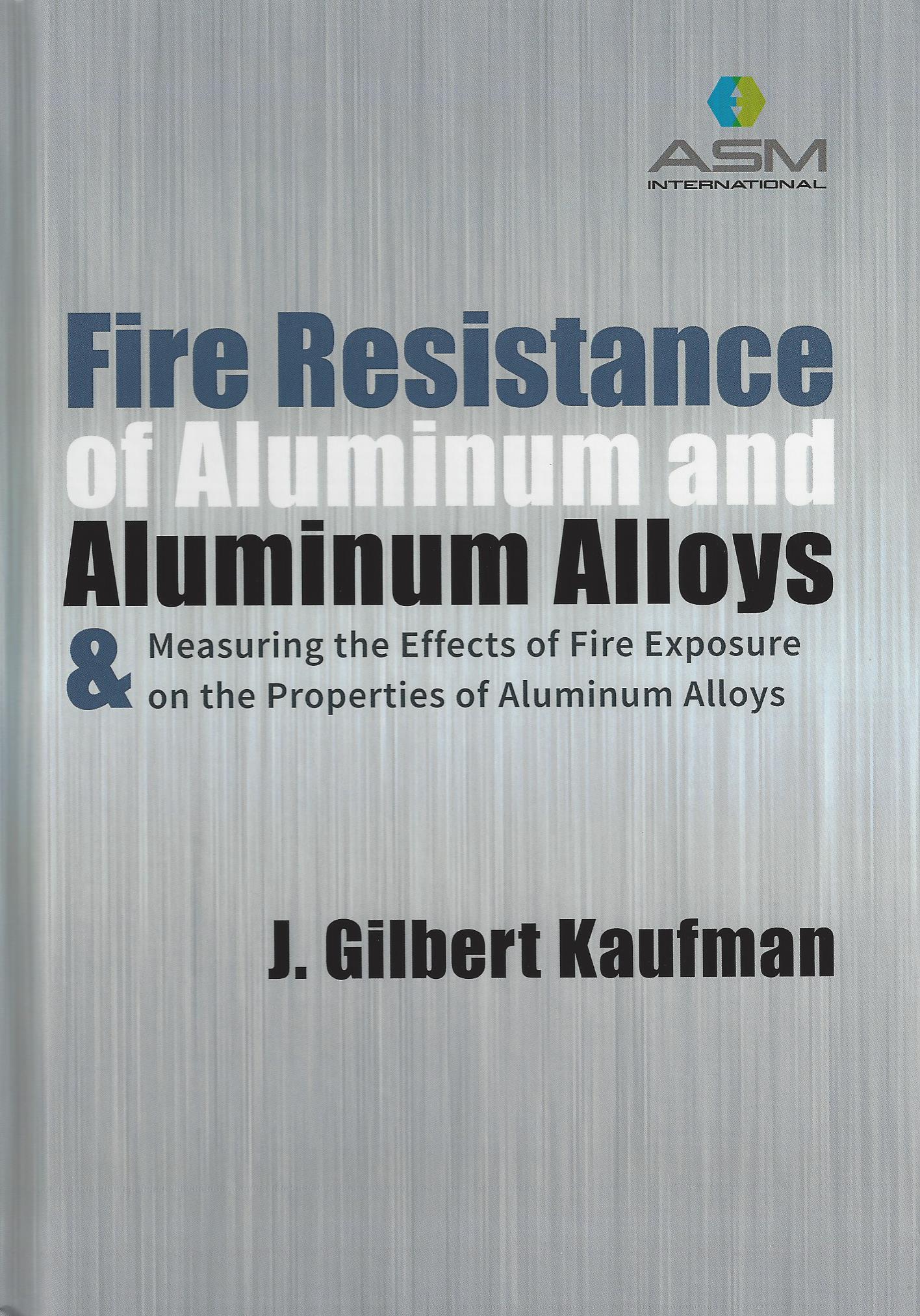 Fire resistance is an issue that needs to be addressed before aluminum and its alloys are used in any structure that may be exposed to high temperatures and potential fire hazards. Because aluminum melts at ~1,200°F, the common view of aluminum alloys in some types of structures is that they are generally less resistant to high temperatures than steels (which melt at temperatures more than double that of aluminum) or reinforced concrete. As the prolific author of several books on aluminum and aluminum alloys, J. Gilbert (Gil) Kaufman writes in the introduction to his latest book, “The natural physical characteristics of aluminum and aluminum alloys are such that they do not burn under normal atmospheric conditions nor do they contribute to flame spread or act as a fire accelerant.” He further shows how aluminum alloys have obtained high fire ratings by using ordinary fire insulation, such as vermiculite, gypsum, and Rockwool. The devil is in the details, as the chapters go on to explain.

The relatively short Chapter 1: Properties and Characteristics of Aluminum and Aluminum Alloys reviews some physical and mechanical properties of aluminum and aluminum alloys along with information on the performance of aluminum in building structures after fire tests conducted according to ASTM, British, Canadian, and Uniform Building Code standards. Results of these fire resistance tests are referenced, and several are presented in representative reports (Appendix 3) taken from the Aluminum Association on the fire resistance of aluminum in structures.

Chapter 2: Fire Protection of Aluminum Structures describes the various types of insulating encasements of aluminum for fire protection in building columns (extrusions) and naval bulkheads (sheet, plate, and extrusions). Kaufman presents data from his original article, “Fire Protection for Aluminum Alloy Structural Shapes,” published in 1963 in Civil Engineering (included in its entirety in Appendix 4). With a gypsum/vermiculite insulation coating, aluminum alloy I-beams withstood an exposure of up to 100 min in a gas-fired test chamber (ASTM E119) that reached 1,750°F within 100 min without the I-beam temperature rising above about 220°F (pictured). The extruded wide-flange columns in these tests were made of 2014 alloy in the T6 condition. The fire tests of aluminum bulkheads and deck insulated sections conducted in England and Norway with temperatures rising in oil-fired furnaces showed no damage or distortion after 65 min, at which time the furnace temperature reached 2,012°F.

As Kaufman mentions in the lead-in to Chapter 3: Aluminum in Fire-Sensitive Applications, “Aluminum has been thoroughly evaluated and successfully used in a great variety of components and structures where the concern of fire hazards and/or the need for fire protection may be encountered.” The applications he describes here are offshore oil rigs with aluminum superstructures, building wall and skin structures, aluminum gasoline tank cars, automobiles and light trucks, railroad cars, commercial ships, and naval vessels.

With respect to naval vessels, he cites some major accounts of aluminum behavior in fires such as the collision of USS Belknap and Kennedy in 1975 (when the entire superstructure of the Belknap was engulfed in flames from ruptured fuel lines on the Kennedy); the 1982 sinking of four British Royal Navy warships in the Falklands War (British Admiralty concluded that there was no evidence that aluminum contributed to the loss of any vessel); and the damage to the USS Stark frigate by Iraqi missiles on May 17, 1985 (investigation showed no evidence that aluminum burned or contributed to the damage).

Finally, the one page Chapter 5 lists examples of unsuitable applications for aluminum and aluminum alloys, such as any product operating continuously over 400°F (furnace, oven, motor, engine component, etc.) and (no surprise) fire doors.

As important as the book’s text are its appendices, which represent half the content of the book. For data on structural wrought and cast aluminum alloys, engineers and technologists can refer to Appendix 1: Elevated Temperature Tensile Properties of Representative Alloys and Appendix 2: Physical Properties of Aluminum and Aluminum Alloys. All data are presented on a particular aluminum alloy in various tempers. For engineers working with heat transfer and structural property software, these data would be extremely useful for predicting behavior of aluminum alloys in fires.

For readers interested in fire resistance of aluminum and aluminum alloys, this book is a welcome and valuable review of critical information and data on the subject.