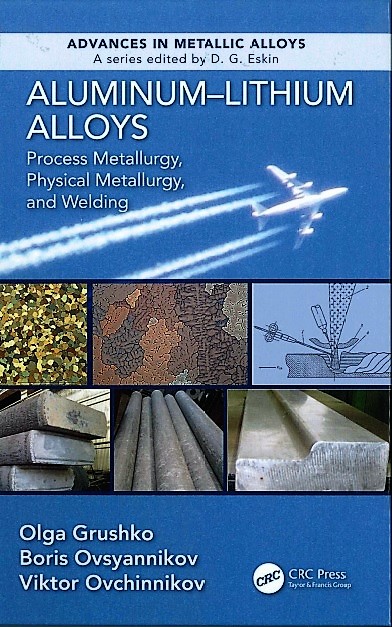 Written by three Russian metallurgists, with a trove of experience in Al-Li alloy development and processing spanning many decades, Aluminum-Lithium Alloys (part of the Advances in Metallic Alloys series edited by D.G. Eskin) provides the theoretical foundations for melting, casting, forming, heat treatment, and welding of Al-Li alloys, so critical in the design of lightweight, high performance structural elements used primarily in civilian and military aircraft and aerospace in general. The book reviews the work done on Al-Li alloys since the 1960s until today, showing how the development of older Al-Mg-Li and Al-Cu-Li alloys has improved in terms of mechanical properties through selective changes in alloying and processing. The book was written for an audience of engineers and scientists involved in the research, development, and application of these alloys in modern aircraft and aerospace structures.

The lead author, Dr. Sci. Olga Grushko, has worked at the All-Russian Research Institute of Aviation Materials (VIAM) since 1959, where she now serves as a chief scientist, well known as a leader in the field of new Al-Li alloys. Co-author Dr. Boris Ovsyannikov, chief metallurgist and head of R&D at the Kamensk-Uralsky Metallurgical Works, has developed casting production methods for Al-Li alloys, including new classes of Al-Li alloys containing scandium. And, co-author Prof. Dr. Sci. Viktor Ovchinnikov, head of the welding laboratory at the Russian Aircraft Corporation JSC, has developed manufacturing techniques for the welding of aircraft structures made of Al-Li alloys. This “troika” of authors has pulled together 265 references, mainly from Russian technical sources, and summarized the vast literature in eight concise and readable chapters, detailing not only the theoretical basis of Al-Li alloying but all the practical aspects of their production and fabrication. The authors’ have amongst themselves hundreds of technical publications, several of which are referenced in the book, and many inventions dealing with commercialization of Al-Li alloys.

In Chapter 1 – Brief History of Aluminum-Lithium Alloy Creation, the development of the first Al-Li alloys in the 1950s is described with the impetus being the specific gravity of lithium at 0.536 against that of aluminum at 2.699; these early Al-Li alloys were based on the Al-Cu-Li system and included 2020 (USA) and VAD23 (USSR). Besides being ~3% lighter, these alloys were ~8% stronger than the conventional 2024 and D16 hard alloys. However, the authors point to the breakthrough Al-5.5Mg-2Li alloy 1420, developed in Russia in the 1960s, which is the lightest commercial aluminum alloy in use today, being 10-12% lighter than the 2xxx series alloys used for the fuselage of aircraft at the same strength levels and with higher corrosion resistance. Chapter after chapter here, the 1420 alloy merits most of the attention in this book (Figure 1), with significant modification to its composition over the years leading to improvements in processing and fabrication, the latest involving the modified alloy 1421 containing 0.16-0.21 Sc. Because of the importance of alloys in the Al-Cu-Li system, registered since the 1980s in the U.S., France, and England, and the basis of several Russian alloys including 1450, 1460, and the original 1230 (VAD23) alloy, they are also covered.

The theory behind Al-Li alloying and the effect of metallic and nonmetallic impurities, including alkali and alkali-earth impurities such as Ca, Ba, Na, and K resulting from melt processing, the effects of melt protection against oxidation by Be and Y additions, and the thermodynamics of melt-flux interaction are covered in Chapter 2. Since Li increases the solubility of hydrogen and is a hydride former, minimizing the hydrogen content during melting of these alloys by vacuum treatment and electroflux refining has been shown to control hydrogen content to acceptable levels, as shown in Chapter 3.

Billets cast from Al-Cu-Li and Al-Mg-Li alloys are compared in Chapter 4 in relation to their ductility, impact toughness, and mechanical properties critical to preventing cold cracks in casting. The influence of the main alloying elements and Fe/Si ratio on room temperature elongation and impact toughness is presented in various graphs and ternary diagrams. So too are the thermophysical properties of the solid-liquid state of Al-Cu-Li, Al-Cu-Li-Mn, and, of course, Al-Mg-Li alloys tabulated along with the temperature dependence of relative elongation and linear shrinkage in the melt interval plotted. Several tips are given for proper casthouse practice in relation to successful forging, rolling, and extrusion of these alloys.

The metallurgical principles of controlling grain size in solidification of billets and flat ingots and slabs and the influence of heredity of cast structure on flow characteristics in metalworking and final product are covered in Chapter 5. Chapter 6 recapitulates many of the metallurgical effects in alloy and casting, including heredity of cast structure, as applied to the structure, properties, and weldability of 1420 alloy billets. Chapter 7 does the same but as applied to the weldability of 1420 alloy die forgings in relation to both initial slab structure as well as micro- and macrostructure of the die forging itself. Weld joint material properties, including notch strength, fracture toughness, and fatigue properties, are tabulated for production die forgings made of 1420 alloy using automatic argon arc, manual argon arc, and electric arc welding processes.

In Chapter 8, the final and most voluminous chapter of the book, the welding of Al-Li alloys is covered in great detail. All the conventional and some non-conventional welding processes are mentioned in this regard. Data are presented on 1420 and other Al-Li alloy weld joints made by electric resistance spot welding, and fusion welding with and without filler metal. Some of the welding processes described include arc welding with magnetic stirring, automatic welding with a rotating electrode, hybrid laser and plasma welding, friction stir welding (Figure 2), and electron beam welding (Figure 3). By not only describing the features of the various types of welds made with Al-Li alloys, this chapter outlines the mechanisms of defect structure occurrence in welding Al-Li alloys and offers guidance on avoiding defect structures in these welds.

Editor’s Note: This book review was first published in the December 2016 issue of Light Metal Age.