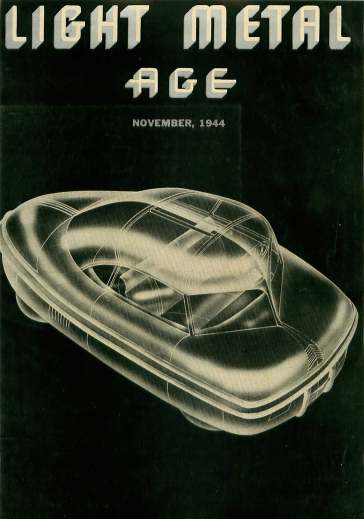 The November 1944 issue of Light Metal Age presented an image of “Tomorrow’s light metal car.” In the associated article, the writers talk about the use of aluminum and magnesium in the sleek-lined, spaced-aged cars of the future.

Many projected or possible applications of light metals are now being “imaginered” by both the automobile designer and the potential light metal supplier.

Ray Russell, president of the Detroit Industrial Designers Association, has also been doing a little imagineering on his own. Furthermore, he has put some of his art work into an actual model, which he calls the “Gadabout”. 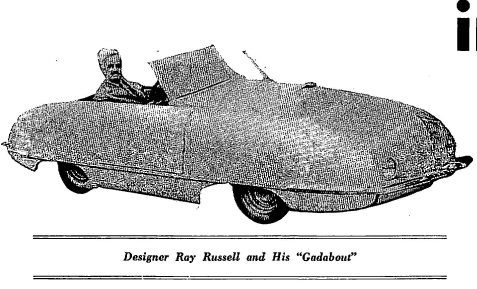 He is convinced that there is a very logical market for a comparatively small light weight car for the average person to use about town. His “Gadabout” is built on a 80 inch wheelbase and the overall weight is about 1,100 pounds. Two or three passengers can be carried with the economy of a motorcycle. He gets 50 miles on a gallon of gas which about boils down to an operating economy equal to street car fare.

The light weight, of course, is due to liberal uses of Aluminum and Magnesium alloys, as well as some Dural. One might say that the body is unique in that it does not carryover any of the relics of the “Horse and Buggy” days. It is full width, extending over all four wheels, the contours being smooth and the lights flush with the body. 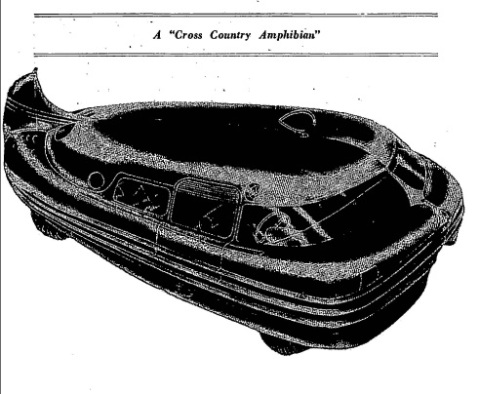 Front and rear sections are equiform which enables free flowing lines, with relatively
cheap die cost. Russell feels that the metal stretching press can be used advantageously for forming and that aluminum alloy sheet similar to that being used for certain airplane parts to6iay can be utilized for the material.

The die may be built of concrete for low ‘production or of steel for volume. The metal sheet is clamped around the edges and a hydraulic ram stretches the sheet around the die. In effect this completes the chassis frame which consists of four corner sections plus two doors and a metal stamped floor.

A tube, attached at bumper height, surrounds the car and adds protection as a crash pad. 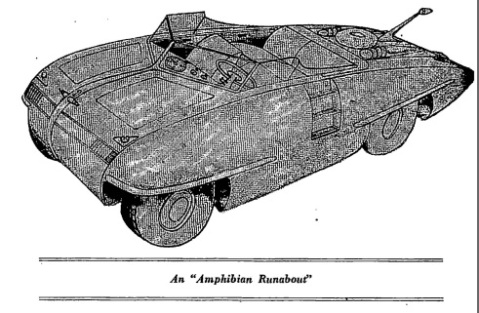 The compact motor may be placed forward or preferably in lhe rear. This motor can be of a two cycle type having direct gasoline fuel injection into the cylinders, with an exhaust driven turbo supercharger which cools the motor internally, giving better fuel economy and eliminating water-cooling annoyances.

Such a car says Russell, will use only about one third of the basic materials of the average car on the road today. Or to look at it another way-it would give three times as many people transportation for an equivalent outlay in our natural resources. if such a model is of sufficient interest to enough people we can expect “Gadabouts” galore and at a tremendous price saving over our standard pre-war automobile.

The model on our cover has been sketched to illustrate, among other things, the transparent plastic roof. You will note a roller shade incorporated in the roof in order to keep the front seat cool. There is also a venturi tube which throws a blast of fresh air up the windshield and under the plastic dome to keep cool in summer and connects to a heater for winter driving.

Two synthetic rubber bumpers gird the entire body which are mounted directly to the metal tube framework of the body. By incorporating aluminum for the body there will be no point to chip off nor rust to come through and scale.

Inside there is plenty of room for luggage or accessories and one doesn’t have to get out in the rain to get at them, says Russell.

It can possibly be said that these models are a little “far-fetched” but, then again
when we look at the “1915 Sport-Job”, who knows?