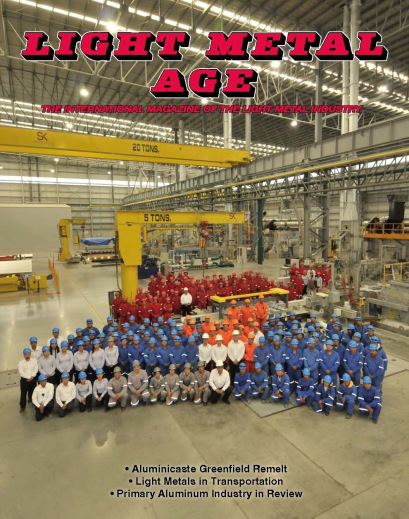 The February 2014 issue of Light Metal Age is now available. The digital edition has been released to subscribers and the print edition will be shipped next week.

The cover features the Aluminicaste team. Aluminicaste is an aluminum greenfield remelt facility located in Central Mexico now close to full production capacity. The plant casts mainly extrusion billet, as well as rolling ingot and forging/large press billet, on two DC casting lines in both hard and soft alloys. An initial phase has been completed but expansion potential is expected to take the plant to become one of the largest operations of the kind in North America.

Editorial departments includes a Book Review of the Aluminum Association‘s Aluminum Standards and Data 2013, a Product Spotlight on Pyrotek’s Pyrofloor 80 floor tiles, and an Equipment Spotlight on Brochot’s third generation of its Berger specialized vehicles for aluminum smelters. Other coverage include the Primary Aluminum News, Extruder News, Contracts & Expansion, and Lightweight Matters on the New Year’s Eve ball winning a welding award and NASA’s examination of the Shell Buckling Knockdown Factor in its aluminum-lithium fuel tanks.

If you would like to receive a copy of the February issue, as well as future issues of Light Metal Age, you can subscribe online.