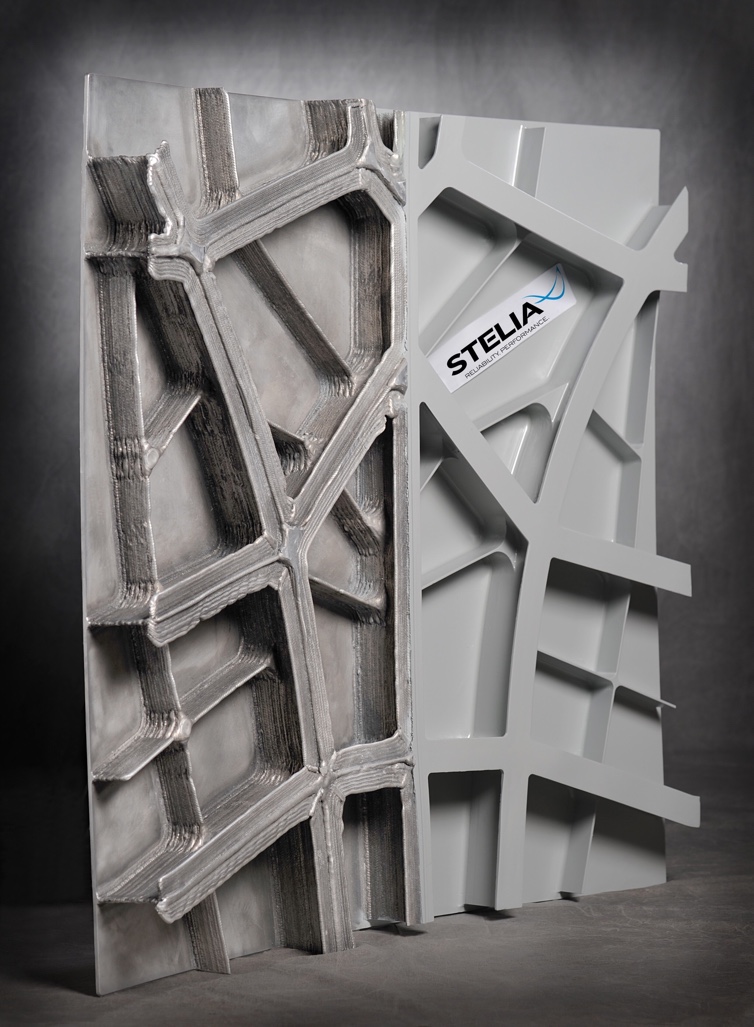 STELIA Aerospace, in partnership with Constellium, Ecole Centrale de Nantes, and CT Ingénierie, introduced a demonstrator for metallic self-reinforced fuselage panels, with stiffeners directly manufactured on the surface, through additive manufacturing. In the long term, this new technology could eliminate the current added stiffeners, which are attached to the fuselage panels with fixing screws and sometimes welding.

The team of companies developed the fuselage panel demonstrator, which measures 1 sq m in size. It was manufactured using wire arc additive manufacturing (WAAM), in which a robotic tool deposits and welds aluminum wire with electric arc to create complex parts. The demonstrator presents a new disruptive design for panel stiffeners, derived from the fuselage topological optimization studies that have been carried out by STELIA Aerospace and CT Ingénierie for several years.

This new 3D-print technology for large dimension components could allow for the possibility of the manufacturing of concepts such as the fuselage demonstrator in the future, thus freeing production from complex constraints due to the assembly of stiffeners.

With support from Constellium and Ecole Centrale de Nantes, STELIA Aerospace is currently studying additive manufacturing technologies. The development of this demonstrator and other projects are conducted under the Under the scope of the R&T project DEFACTO (DEveloppement de la Fabrication Additive pour Composant TOpologique), which co-financed by the DGAC (French Directorate General for Civil Aviation) and the partners involved. The project, which is planned on a 2.5 year basis, is part of a research strategy launched by STELIA Aerospace in 2014, about topological optimization studies associated with 3D-printed demonstrators for elementary parts (such as fittings), large dimension parts (frames), and large sub-assemblies. The project seeks several benefits, such as new designs, the integration of functions, less ecological impact through the use of less material, lightweighting improvements, and less recurring manufacturing costs.

“With this 3D additive manufacturing demonstrator, STELIA Aerospace aims to provide its customers with innovative designs on very large structural parts derived from new calculation methods (topological optimization),” said Cédric Gautier, CEO of STELIA Aerospace. “Through its R&T department, and thanks to its partners, STELIA Aerospace is therefore preparing the future of aeronautics, with a view to develop technologies that are always more innovative and will directly impact our core business, aerostructures.”