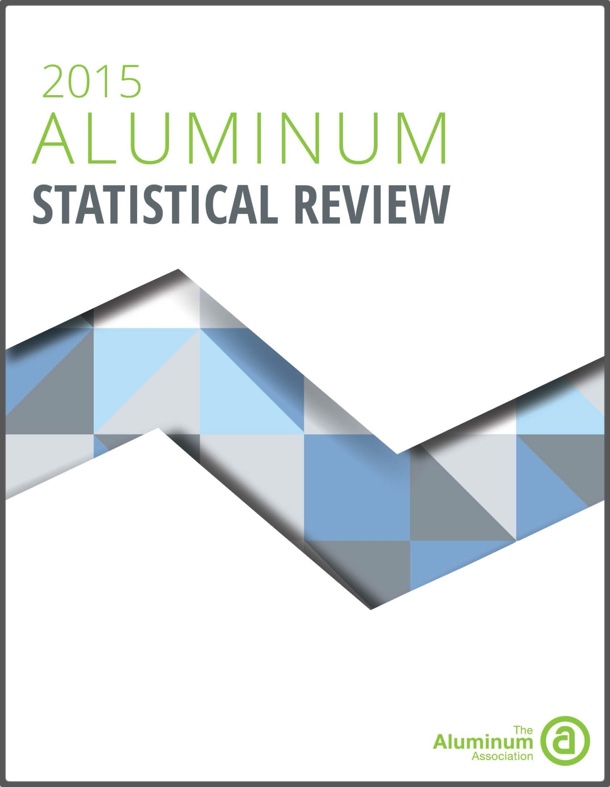 The Aluminum Association released the latest edition of the Aluminum Statistical Review for 2015. The latest review features a new design, statistics through 2015 in the North American market, and information on every cycle of the aluminum production process from primary aluminum to markets for finished goods to the recovery of aluminum scrap.

The 2015 review shows continued growth in demand for the metal and positive trend lines in many key market sectors. Among key findings for the North American industry, the report found that in 2015:

“As the principal source for aluminum industry business and statistics information in North America, the Aluminum Association strives to provide key information on emerging trends in the industry across the entire value chain,” said Ryan Olsen, Aluminum Association vice president for Business Information and Statistics. “The Review highlights the continued demand growth for aluminum for the sixth consecutive year.”

Overall in 2015, the industry shipped more than 25.7 billion pounds of aluminum for the first time since before the recession, with total demand up more than 37.4% since 2009. Demand in the building and construction sector has grown nearly 21.2%, while the transportation market has grown an unprecedented 113.4% during that same time period. With that growth in mind, the North American aluminum industry has committed to more than $2.6 billion in domestic capital investment, as producers look to build on this positive growth and continue to position aluminum as the material of choice in the coming years.

“While we are pleased to see that demand for aluminum is continuing to trend upward in North America, we share the concerns of many other aluminum-producing regions about the dramatic spike in metal imports illustrated by the report. We believe this import growth is a direct consequence of persistent aluminum overcapacity in China,” said Heidi Brock, President & CEO of the Aluminum Association. “The Aluminum Association’s members are committed to pursuing a negotiated agreement between the U.S. and Chinese governments on overcapacity. The Association is committed to ensuring a fair and level playing field across the aluminum value chain for all aluminum producers worldwide.”

The Aluminum Statistical Review is intended to support members of the domestic industry, global industry, financial analysts, government agencies, students, and the general public. It is divided into five major sections: supply, shipments, markets, foreign trade, and world statistics. Its contents include text, tables and charts to provide year-end figures and other historic data on U.S. and Canadian shipments, markets, supply, and foreign trade. While the latest edition spotlights 2005-2015, it also provides historical statistics on the aluminum industry.