The Kimbo is a frameless aluminum camper with a shell made from a 5052 aluminum alloy that attaches to any 6 ft. truck bed. Mark King, owner and lead designer currently has two patents pending on the Kimbo.

King has in impressive docket of inventions. He learned how to weld aluminum while making his very own electric car in high school.  Subsequently, he dropped out of community college and invented a granola bar texture analyzer for General Mills, and after that he started the company Trayvax to make digital-theft-proof metal wallets (part aluminum).

King is an outdoor enthusiast who was living in a 19 ft airstream trailer for three years. However, he desired something more simple, yet still practical and aesthetically pleasing.  He decided to design his next home — and that was the first Kimbo camper.

Having had many diverse experiences using aluminum, King chose the metal as his medium. “I think aluminum is beautiful, and it’s easier to work with than other materials. It’s also very aerodynamic, and so light,” said King. “I can leave it [the Kimbo] on my truck and take it with me anywhere. I even pass people in the fast lane.”

When designing the Kimbo prototype, he began by joining the aluminum shell using welding technique, but it took him two weeks straight for a single camper. So, he went in search for a new solution. Now, he uses riveting to join the aluminum together, since it is much less challenging, and in terms of business, faster to put together. 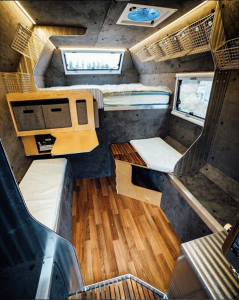 King came up with the no-frame design so as to maximize the amount of usable interior space and as a way to prevent major temperature transfers. Frames tend to easily transfer cold or heat from the outside, but with the frameless Kimbo, panels of foam on the inside can turn it into a giant cooler. The interior of the camper contains R5 insulation with a brushed fabric interior.

The outside of the camper shell features a brush finish. Having had the experience of tree branches scratching one of his RVs, King is familiar with how easily campers and RVs get dinged. The brushing technique was devised so if the Kimbo were to be scratched, the scratch would fade right in.

One of King’s favorite things is to see people’s reactions to the inside of the camper. “It’s very cozy, like a home with a kitchen, fireplace, two couches, table, fridge, shower (etc.),” said King.

It takes about one month to manufacture a single Kimbo camper, and so far 19 have been sold including pre-sales.