The Runxuan Textile office, located in Zangcha, Foshan, China, is adorned with a curvilinear aluminum façade and undulating ceiling designed by Masanori Design Studio. Masanori was entrusted with the project to conceive a workspace for the company, which hoped that the new office could enhance its competitiveness in a town famous for its textile production.

Inspired by the movement of textiles and cloth production, the building’s new look imitates the flowing quality of fabric. The long aluminum battens run through the interior of the building producing a 3D wave effect, and echoing the rolling form of the façade, connecting the inside to the outside. The aluminum rods are bright white and interspaced, allowing more light to fill the office, and creating a bright environment. 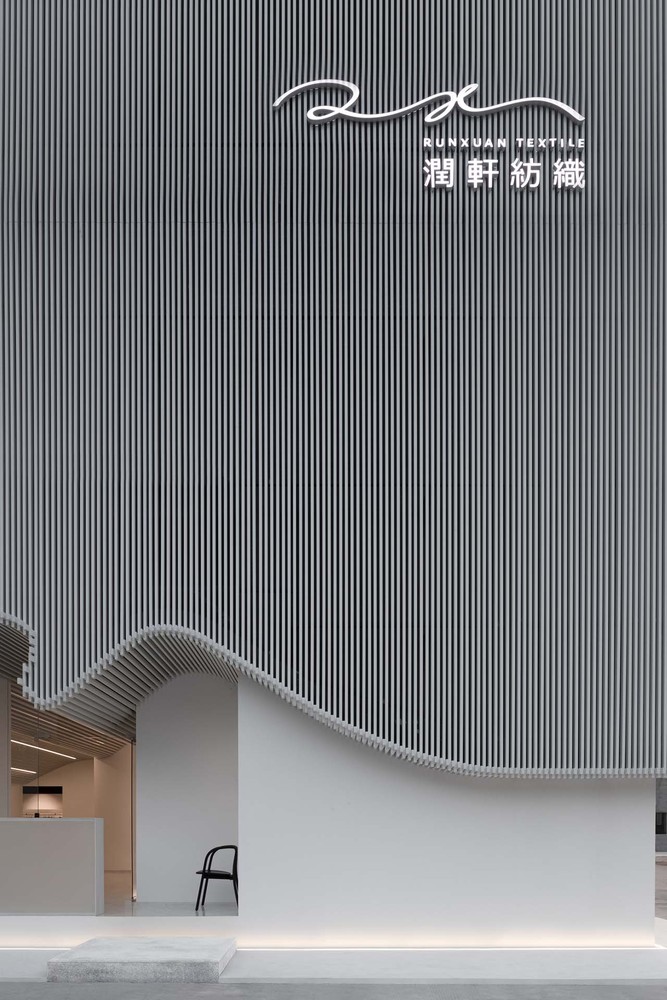 To meet the client’s needs, the designers were asked to conserve and incorporate the building’s preexisting tiles into the façade and integrate a feel for the company’s brand. They also had to meet the challenge of bringing more natural light and ventilation into the building. Accordingly, the designers created a separate passageway at the side of the three room office, and made an artificial “skylight” via a stretch ceiling, which seems to bring light in.

As the passage connects the three rooms, when the back door of the reception room is opened, the wind can be directly introduced into the two office rooms creating a natural airflow. Moreover, by optimizing a functional interior layout and solving its lighting and ventilation problems, they created a healthier and more comfortable office, which became another feature of this project.

The Masanori design team, run by Terry Xu, won a 2021 iF Design Award for the curvilinear aluminum building in the discipline of ‘interior architecture.’

Masanori Designs describes themselves as not having a specific architectural style, but favoring the development of “architectural thinking” at the core of their design technique. One of their driving motivations is to find a balance between indoors, nature, and people, and give full play to the value of each space. In the video below, this kind of architectural thinking is conceptualized for the aluminum-clad Runxuan Textile office.