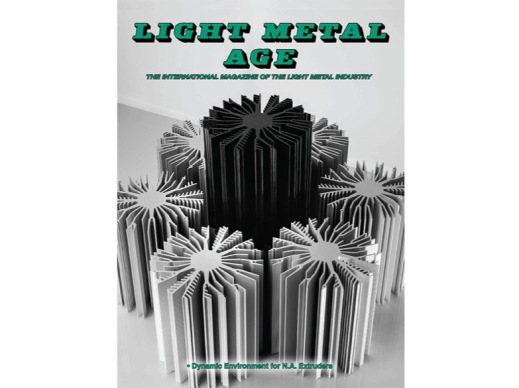 The April 2015 issue of Light Metal Age is now available! The digital edition has been released to subscribers and the print edition will be shipped next week.

On the cover: Collaboration between Litelab Corporation and Almag Aluminum of Brampton, ON, Canada, yielded this highly engineered heatsink for a high-powered LED. Designed to handle thermal loads over 40 W without forced convection, this fixture is capable of producing 5,000 lumens. The complex extrusion shown in both clear and black anodized utilizes a tailored alloy, serrated cooling fins, and enhanced geometry to achieve optimal heat dissipation.

The issue includes a book review on 2015 Automotive Aluminum Joining Manual, published by the Aluminum Association and coverage of Extruder News, as well as the Directory of Aluminum Extrusion Equipment Manufacturers & Suppliers.

If you would like to receive a copy of the April 2015 issue, as well as future issues of Light Metal Age, subscribe online today!