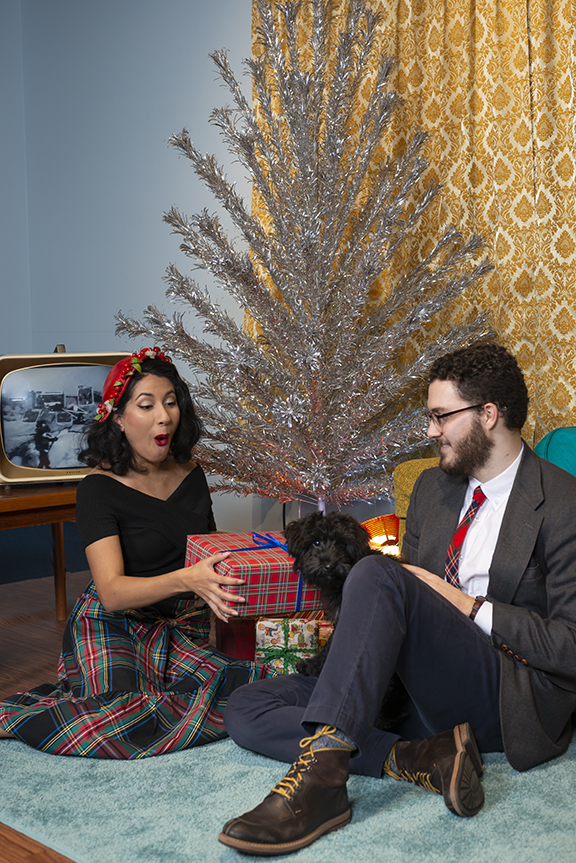 Aluminum Christmas trees have seen a resurgence in popular culture this year, with private sellers on the internet pitching them at four times their original price. Once-deemed too artificial, the shiny trees are now highly sought-after items, cherished for their nostalgia as well as their reusability.

The festive aluminum trees were first mass-produced by the Aluminum Specialty Company in Manitowoc, Wisconsin. The company, impressed by an expensive aluminum tree available at the time, decided they could manufacture a cheaper version. As a result, the aptly named Evergleam aluminum Christmas trees made their debut in 1959. The tree set-up consisted of a trunk pole that screwed into the middle of a stand, and sparkly aluminum branches. Holes were drilled into the trunk at an angle, so the aluminum branches could simply be placed in, and also removed for easy storage.

The Evergleam aluminum Christmas trees were originally available in various sizes from 2-7 ft and sold for $5 to $25. It’s estimated that 200,000-300,000 Evergleams sold in 1959 and within a few years they were being sold by the millions.  Known as the first poplar Christmas tree that wasn’t green, the silver trees soon took on even more colors, being offered in pink, gold, and eventually returning to its roots with a shiny green hue.

Jerry Waak, a sales manager for the Aluminum Specialty Company, explained how the trees were made. “By crinkling each [aluminum] needle on splitting machines, and curling it, it formed what we called a pom-pom,” he said. “That was the biggest hit. You got a reflection of every needle because of the crimping, so you had the maximum amount of light being reflected. There was a real brilliance to it.”

The ever-popular kid’s movie, A Charlie Brown Christmas (1965), is partially credited with the aluminum tree’s fall from fame in the 1970s. The character Lucy tells Charlie Brown to get “the biggest aluminum tree you can find, maybe painted pink!” Charlie rejects the “fake” aluminum tree in favor of a real and somewhat scrawny natural tree. The allegorical message of the cartoon seems to be that Charlie is making a stand against artificialism in what could be seen as the “true” spirit of Christmas.

Ironically, another reason aluminum trees likely lost popularity in the 1970s is one of the same reasons they are making a resurgence today. In 1970, Earth Day was founded in the U.S. and popular culture began taking on more nature-based ideals. Aluminum trees were tossed out and traded for real trees or fake trees that more closely mimicked the natural tree look. Today, it is recognized that buying a new tree every year, using it for a month or so, and then throwing it away is probably more harmful to the environment. Aluminum trees can be used year after year without taking up natural resources, and they can even be recycled!

2019 happens to be the 60th anniversary of the Evergleam Christmas tree, and to celebrate, the town of Manitowoc where the trees originated, have displayed aluminum trees in store windows all over town. The Wisconsin Historical Society Museum is now hosting “Ever Gleaming: 60 Years of America’s Aluminum Christmas Tree,” until January 4, 2020. The exhibit features original trees, artifacts, clips from classic films, popular TV commercials, newspaper headlines from 1959, and a spotlight on the rare trees that collectors seek out today.

Museum visitors can also take a throwback holiday picture in a replica living room from the trees’ mid-1960s peak of popularity, a fun feature for photographers and Instagram aficionados alike. “This exhibit is so much fun, but it also communicates an important message,” said Mike Hollander, director of the Wisconsin Historical Museum. “Our guests get excited about it, and we have a lot of fun setting it up, but the exhibit is also about the creativity of the people at the Aluminum Specialty Company to try a new idea. I hope guests will leave inspired to create their own innovations.”

Wisconsin isn’t the only place this year paying homage to the glittering aluminum trees. Theron Georges’ personal collection of aluminum Christmas trees are currently on display in Houston’s 1940 Air Terminal Museum. Georges, a corporate pilot, is also the writer and publisher of The Evergleam Book. Reminiscing on his parent’s aluminum tree harkened magical childhood memories for Georges who began collecting Evergleams on his own as an adult. He is now the owner of 70 aluminum specialty trees of all different styles and colors, 20 of which can be found shining in the halls of the Houston Airport’s original airport this year.